A look back at some of our previous Show Gardens. 2021 will see a special Mayflower 400 Show garden unveiled 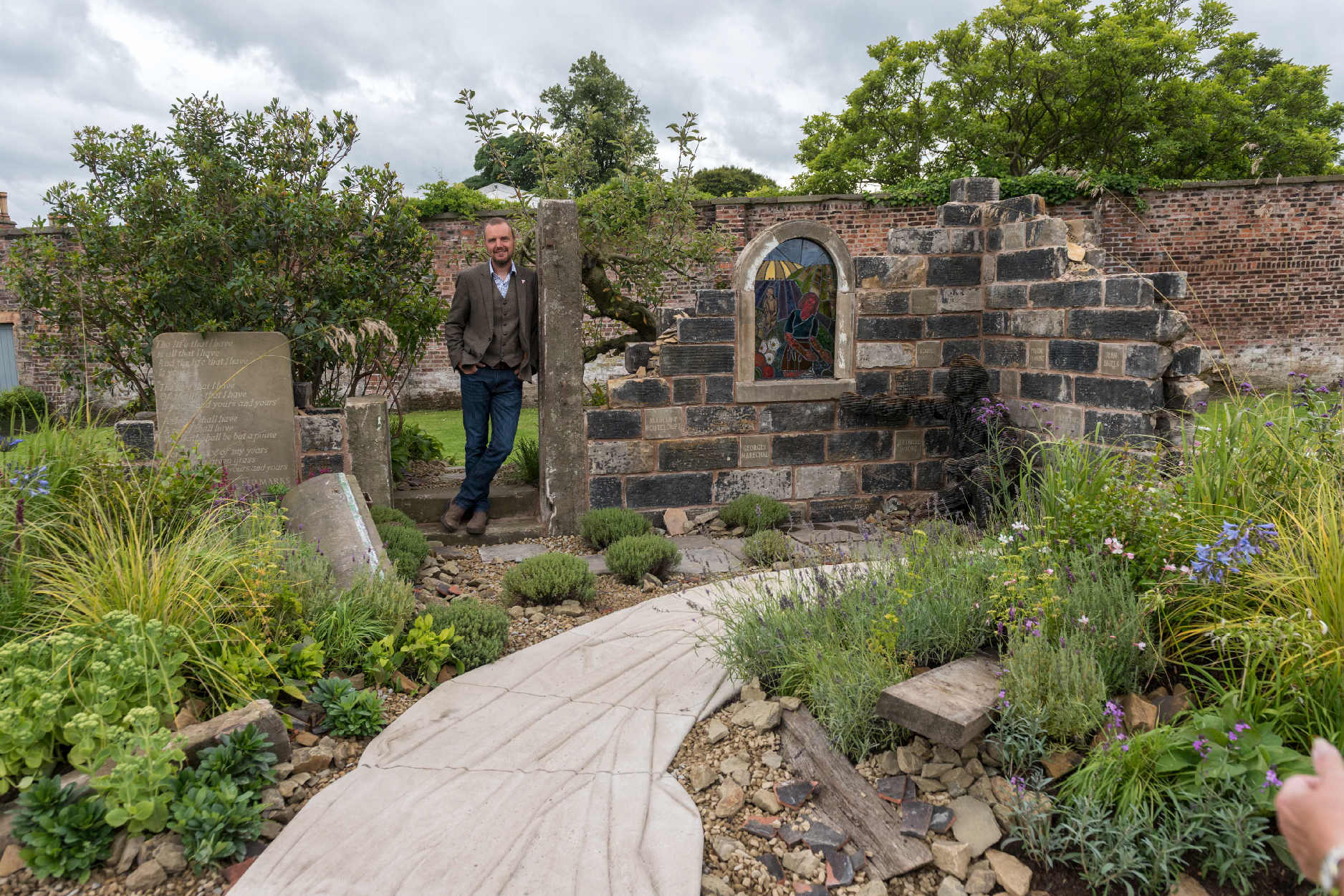 The Evaders Garden was originally built for the RHS Chelsea Flower show in 2015 by Chorley resident, John Everiss, the son of Stan Everiss (who was a Burgundy Line evader). The garden was awarded with a Silver medal at the Chelsea Flower show. Stan Everiss, the designer’s father was an RAF evader who was helped to regain his freedom by ordinary French citizens after he was shot down in 1943.  Inspired by these acts of selfless bravery, the garden’s design reflects the bond between helper and evader.

The ‘Evaders Garden’ shows an airman who has just parachuted from his aircraft, his ghostly image shelters briefly in an old abandoned church with his parachute trailed out before him. His eyes look up to a stained-glass window where two young French people are reaching out to help him; people who could help him but would later pay with their lives.   The wall also has a code poem engraved into a tablet.  Mass planting surrounds the sculpture as nature reclaims the abandoned church.

The Evaders Garden was permanently installed in Astley Park in 2015 for the Chorley Flower Show. 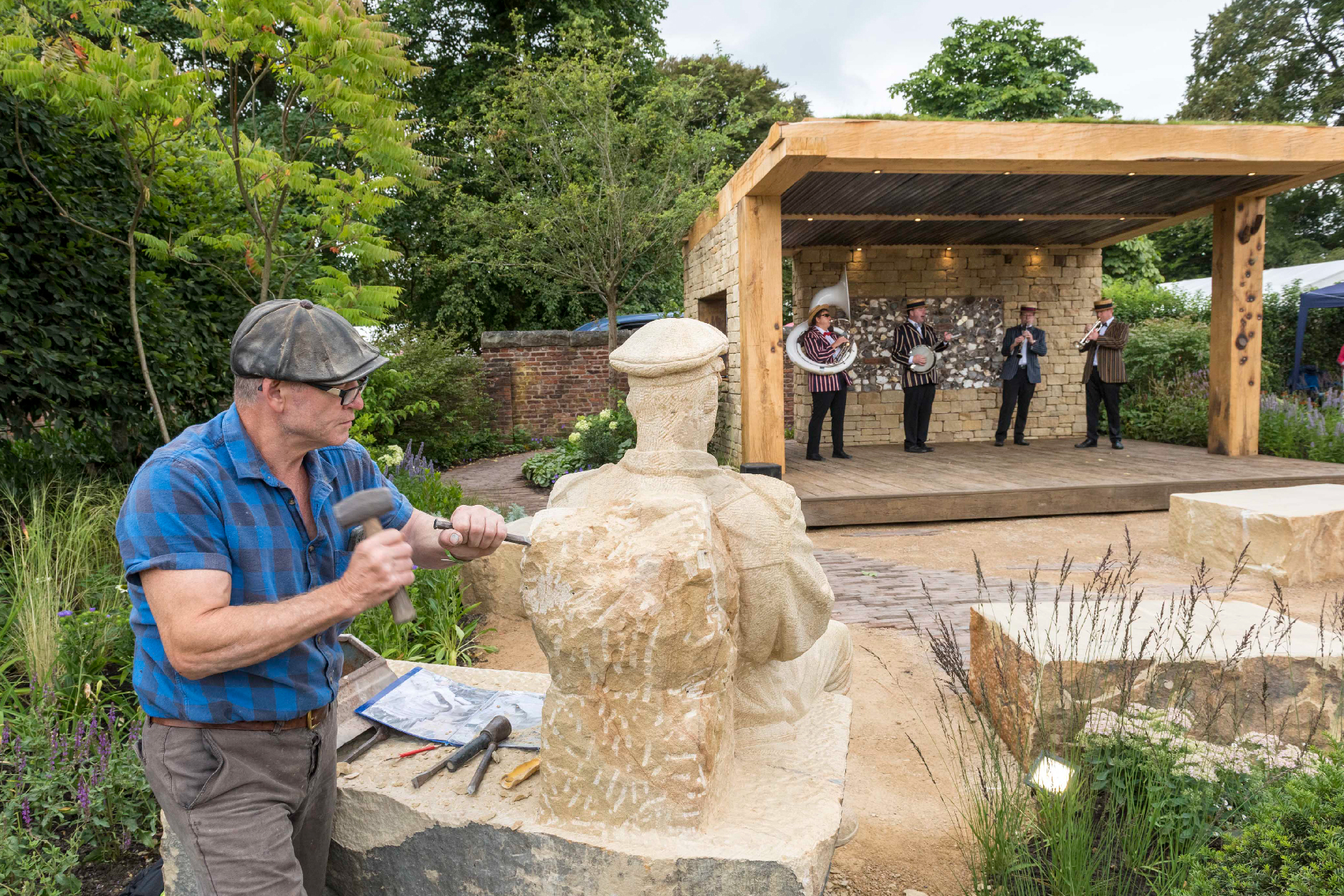 Commissioned for the 2018 show, the Garden of Reflection was permanently installed inside the walled garden at Astley Hall. It provides a lasting memorial to the men and women of the Chorley borough who served during World War One, to mark 100 years since the end of the conflict.

Created by Chorley resident and award-winning designer John Everiss and funded by the Armed Forces Covenant, The Garden of Reflection centres around a performance stage and is a place for people to sit and contemplate, reflect, learn or be entertained.

The flooring is constructed from millboard similar to the duck boards found in the trenches.  The dry stone walls are constructed from local sandstone, to replicate many of the local mills where the men and women who joined up would have made a living. The performance building with its giant timbers and steel roof covered by grasses evoke life in the trenches and dugouts.  Look closely and you will find small pieces of flint and brick, sourced from the Somme where our local soldiers fought and died. In addition, as a tangible, touchable link to the conflict actual battlefield relics from the Somme and Festubert are embedded into the wall.

Take the opportunity to sit next to the Messenger, created in stone by acclaimed sculptor Thompson Dagnall, hand carved from a large single piece of sandstone, his presence within the garden is to generate thought and contemplation. Is he enjoying a performance in the garden, dwelling on the thought of sounding the bugle to signal a charge from the trenches, or has he just finished playing The Post in honour of fallen comrades?

Carved in the large quarried blocks of stone Last, is the words of a little known poem written during the war. The poem “A Letter to Daddy” was written by a child mill worker from Chorley. Although the poem is not famous by the standards of the time, all we know is that it was written by a little girl with the initials M.L. to her Father serving in action. The inclusion of the poem provides a local link to the past. It allows us to reflect upon the feelings of those whose loved ones served in the war and in the setting of the garden, we can explore the thought whether or not the Father in the poem is “The Messenger” or became one of those our messenger was mourning. 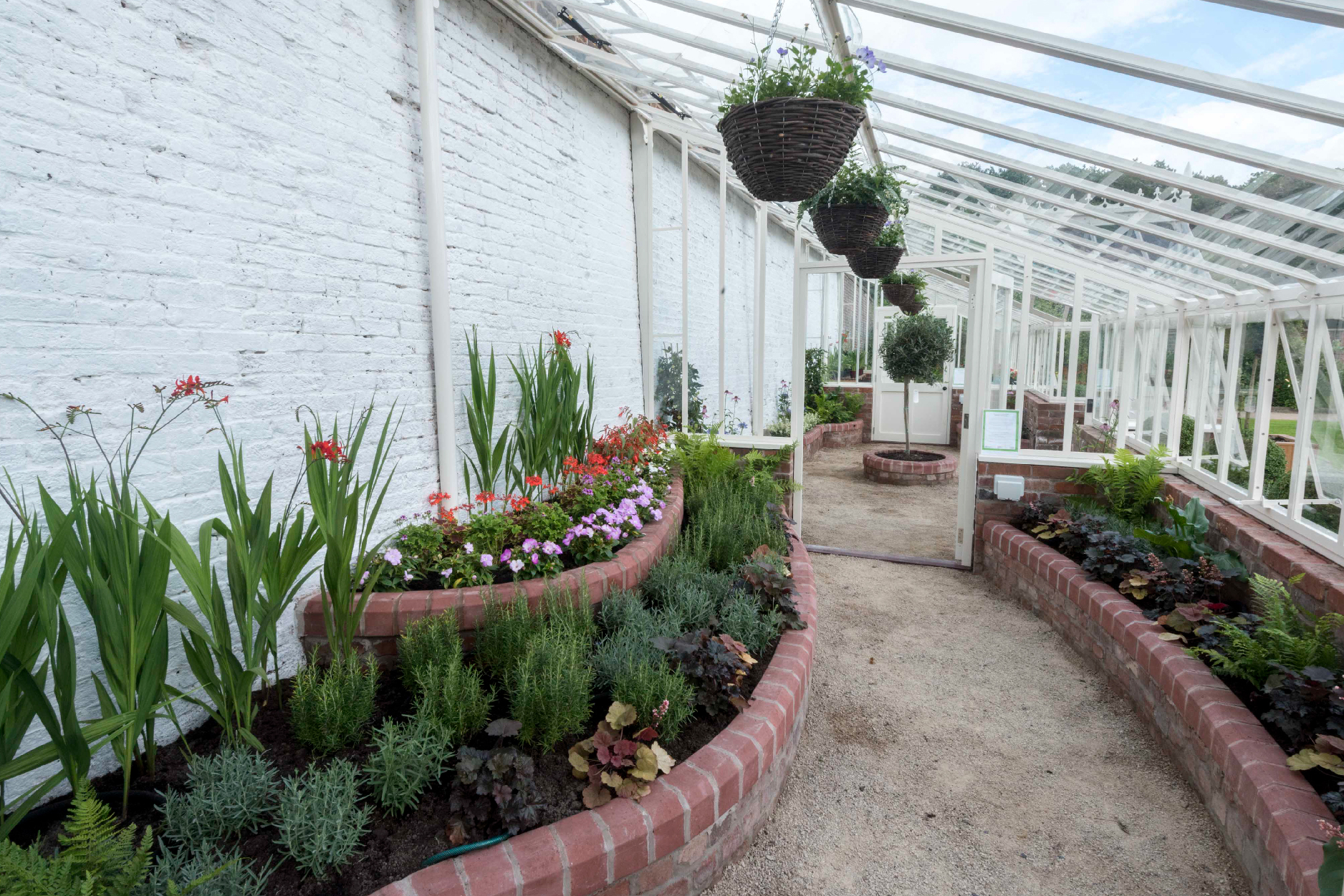 The Victorian styled greenhouse was built in the Walled Garden at Astley Hall and unveiled to the public during the 2016 Chorley Flower Show. An educational resource used by local schools and community groups, the Glass House provides a much-needed covered indoor space to extend the growing season and means that a wider range and diversity of plants can be grown here. The Glass House and the Walled Garden are looked after and maintained by Astley Walled Gardeners a dedicated volunteer group that do incredible work to create a beautiful garden and setting. 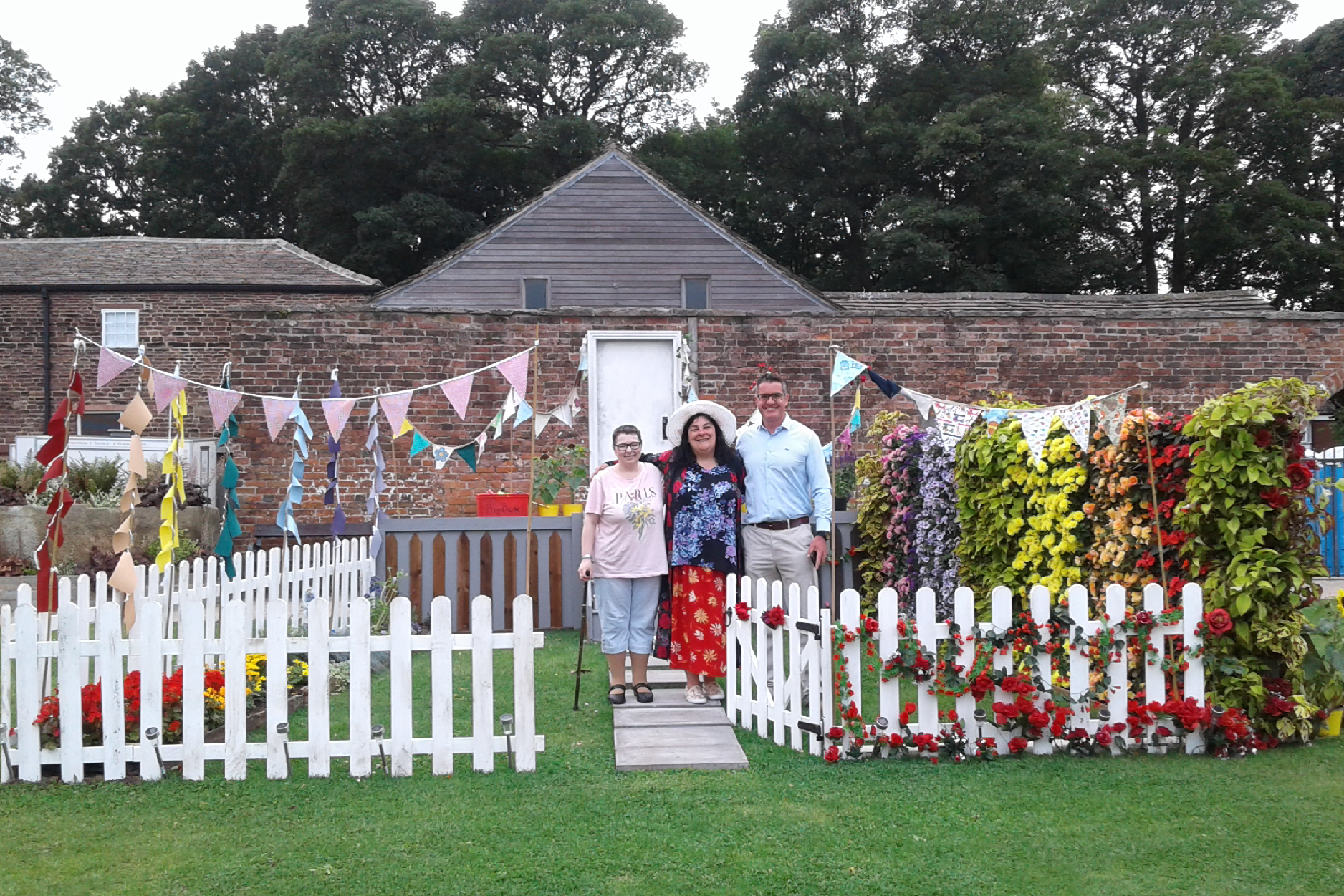 Built for the 2019 show by several different local community groups, the Woman in Mind garden was built to recreate Chorley Theatre. The theatre garden could be viewed all the way around, but the best view was from a chair positioned at the foot of the garden. This created an optical illusion that lined up the stage door with the roof and wall of the surrounding buildings to create the illusion that the door was part of a building. This garden brought a lot of important local community groups together to work in partnership and form friendships and good working relationships. These are important qualities that we like to promote at Chorley Flower Show. 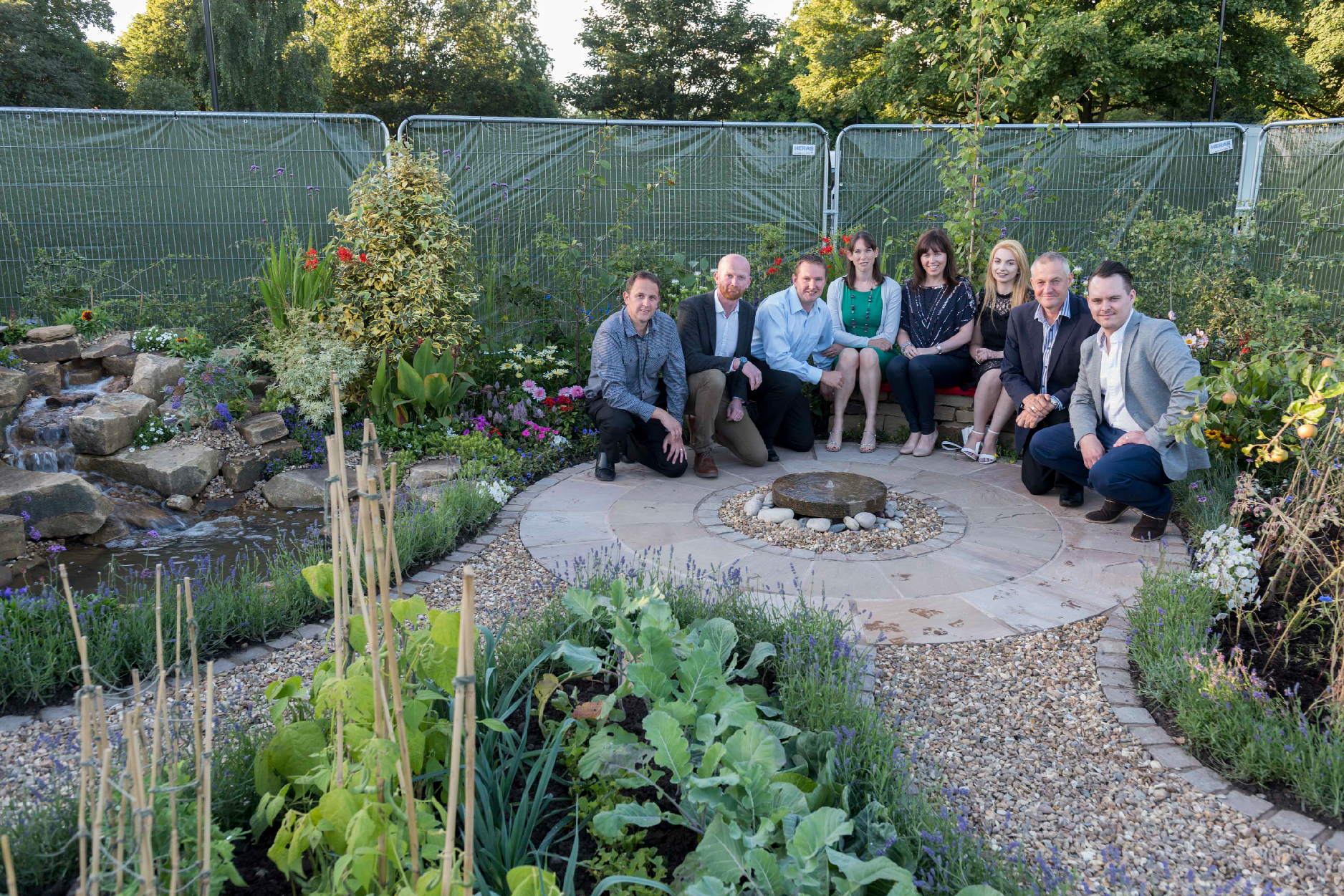 This show garden was created for the show in 2016 and shows the quality of gardens that are produced for Chorley Flower Show. A real beautiful garden with a mixture of aesthetically pleasing hard landscaping and carefully selected plants to enhance the gardens beauty. This show garden also features a waterfall trickling down rocks into a small pond and a water feature in the middle of the stone circled area. The pathways lead to a bench where visitors could come and sit and take in the beautiful garden and listen to the peaceful and relaxing sounds of the trickling waterfall gravitating down the rocks into the pond. 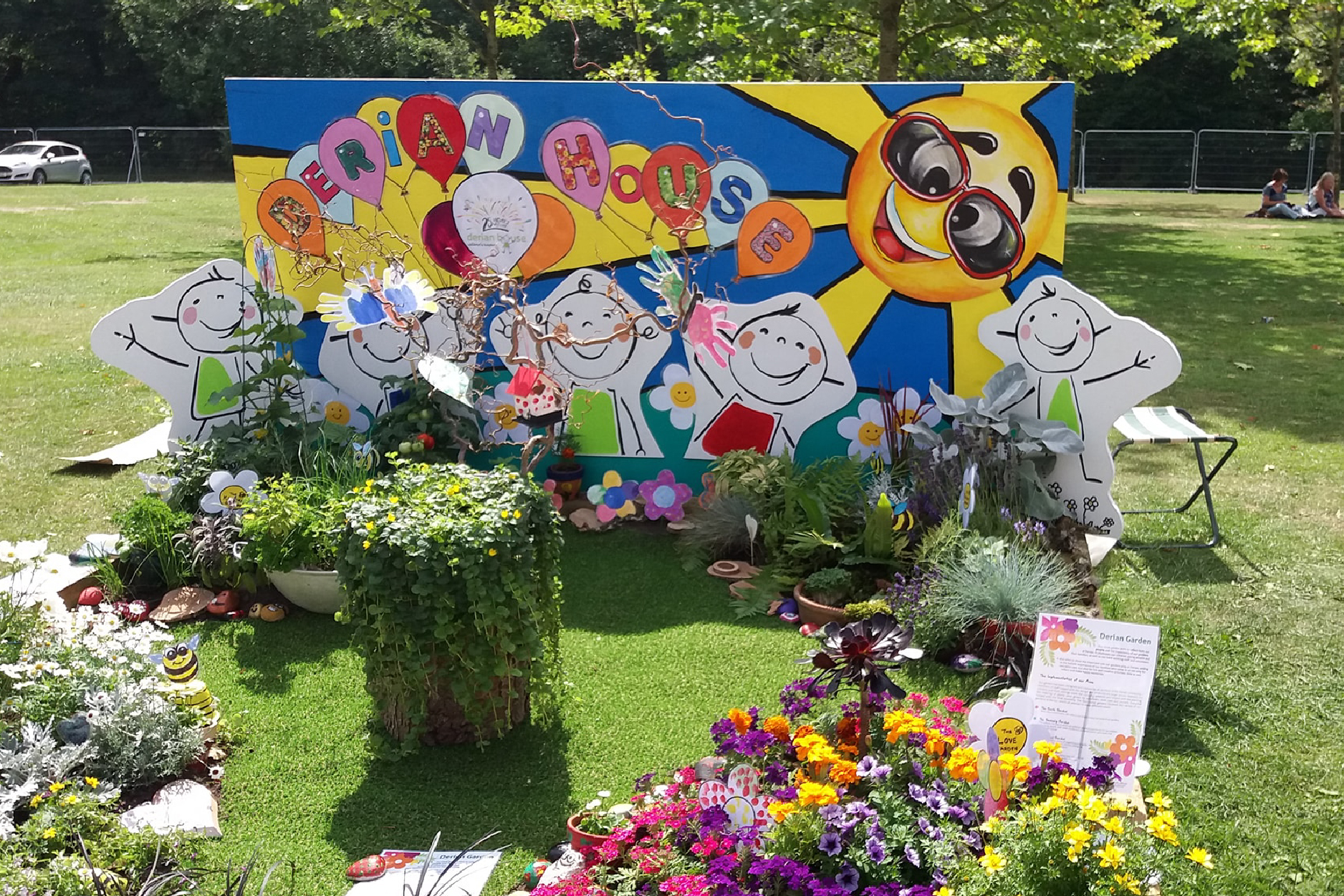 One of the Chorley Flower Show’s important features is the Community Garden Competition. We invite community groups and schools to create a 2 metre squared mini show garden to be on display for the Chorley Flower Show. The quality of the gardens that are produced are excellent and the community groups involved also have an important message to get across to those attending the show. The school groups inclusion is also important as we want to inspire the next generation of young gardeners. The gardens are judged by independent judges and the competition is a fantastic feature of Chorley Flower Show and a real talking point amongst the show’s visitors. Here are some of the beautiful Community Gardens that have been created for the show.